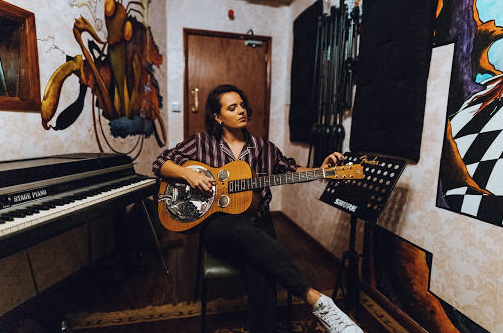 2020 has been a year of unprecedented happenings, filled with extraordinary stories. ‘At Home’, the new album by Georgie is very much hers. Written against the backdrop of a global pandemic, this is a story of love, loss and redemption in these strangest of times.

‘At Home’ was recorded these past few months as Georgie found herself suddenly housebound, locked-down and going through all kinds of hell. Forced to curtail a high profile tour in support of The Lighthouse Family as the coronavirus began to take hold, Georgie returned home only to find a relationship in ruin. Facing an uncertain future in both music and her love life, Georgie sought solace in the isolation of her small home studio and began to write. As days endlessly blurred into one another and chaos unfurled in the world beyond her window, the whirlwind of thoughts in Georgie’s head poured out like diary entries into new songs both starkly honest and radiantly soul-baring. Channelling raw emotions, bittersweet feelings and tainted memories of a disappearing era, the 8 tracks of ‘At Home’ materialised through the haze. In songs of heartbreak (“Unrequited Love”, “Rules We Broke”) to reflections on the importance of friendship (“Company”, “Simple Things”), inner struggles (“Now We’re Lonely”) to hopes for a brighter future (“Blue Waters”); Georgie lays out a roller coaster story of love, loss and redemption; all her own, all experienced entirely ‘At Home’.

Speaking about the writing process of the upcoming album, Georgie says:

“After finishing a UK tour with The Lighthouse Family, Covid 19 descended and forced me to lock myself away. I was lucky to have been building up my own little home studio over the past year so when the lockdown hit I had all I needed to get through and stay creative. ‘At Home’ happened totally organically. When everything seemed to be spiralling out of control world wide and even more so in my personal life I turned to what I know best, writing songs. Writing this album has been my most enjoyable creative time to date. I had no idea it was something that would become an album, I was writing these songs purely from the heart and because like everyone else I didn’t have much else to do.”

Familiar to fans already as a staple of her spellbinding live sets and a highlight of her 2019 album ‘Georgie: Live!’ (recorded at Nottingham’s Trinity Church), lead single “Chasing Kites” is the only song to pre-exist the tumultuous events that unfold in her new album. Co-written with bonafide hit machine Eg White (Kylie/Adele) at his world class studio in Shepherd’s Bush in 2019, the warm experience of writing with him inspired a feeling of self-belief in Georgie to write ‘At Home’ in the way she has. Something of a prologue in the wider story of ‘At Home’, it exudes the same tender soul as its album counterparts and offers a fitting entry-point to her latest work. Out today, Georgie says of ‘Chasing Kites’:

“‘Chasing Kites” is the only song on the album that I didn’t write and produce during lockdown…. This song gave me the confidence to find what I was about musically and really led the way for me to go off on my own and discover the world of production.”

Already well known to many on the UK music scene, Georgie was the first signing to Soul Kitchen Recordings (the label set up by Jake Bugg’s management company: Soul Kitchen). She has built up a loyal following supporting Jake Bugg, Blossoms, Tom Walker, Jack Savoretti and The Lighthouse Family. She comes from Mansfield but her heart is in Laurel Canyon.

Her new album, ‘At Home’ is released on 7 August, via Soul Kitchen Records.