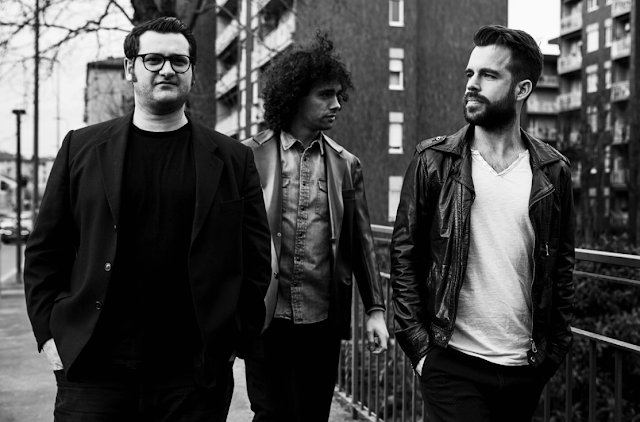 The Ghibertins have shared their latest single ‘I’m War’ from their forthcoming album The Less I Know The Better.  Another politically evocative track from the trio, the song is accompanied by a live video.

Their latest singles have garnered strong  support including media attention by tastemaker magazines such as Clash Magazine, Konbini, Music Week, Noctis Mag and Pure Volume amongst others.

‘I’m War’ is a heartfelt alt-rock anthem recorded in the Lorano Marble Cave in Carrara, Italy making the perfect backdrop for the visual. Rich vocals and seductive guitar riffs meet precise drumming and warm bass tones that perfectly bounce off the walls inside the belly of the mountain.

Directed by Json Adriani the video follows the band on their ‘impromptu-live-setting’ arrangement as they jam among the sedimentary slivers of a forgotten past, shoes white with the residue of mined marble.

On ‘I’m War’ and the new video, the Ghibertins had this to say: “The air the band breathed was pure electricity. Shooting in Carrara’s marble cave has been one of the most exciting and thoughtful experiences we’ve ever had. In a way, you feel like you’re at the top of the world but at the same time you can’t help but feel so small and powerless in front of such a scenario. Considering the lyrics of “I’m War” we wanted to feel all these mixed and conflicting emotions in order to give our best performance on the record and on screen. What we really like about the live track is the natural cave’s reverb that is able to give an extra “boost” to the angriest song of the forthcoming album.”