Emphasis On Doing You With Pink Noise Party’s ‘Queer’ 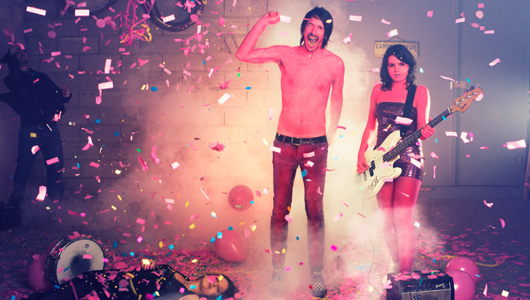 ‘Queer’ is the new release by LCD Soundsystem-inspired Parisian disco pop trio Pink Noise Party. Their sound bridges vintage disco and indie rock with a message aimed squarely at the a world that, in the words of frontman Gaspard Delanoe, “seems to be sliding back into intolerance and close-mindedness.” Queer is a brave and important song: a loud, proud call to be yourself no matter what. “Always be a first rate version of yourself rather than being a second rate version of someone else” he says.

The Paris-based trio is Joy Buckley on vocals, bass and keyboards, Syd X. Rey on vocals, guitar and keyboards and Sebastien Tanquart on drums. Paris has already taken to their curious aesthetic and sonic image, and they now find themselves preparing for a Spring and Summer tour around France. Their post-punk sound texture takes cues from bands such as Joy Division and Magazine, but retains a modern pop feel. Pink Noise Party, oddly, are physicists. They met met while at an international quantum physics conference in Los Alamos.

“‘Queer’ is a fun, exuberant track – a perfect example of Pink Noise Party’s patented quantum pop style,” says Gaspard. “With layered electric guitars giving away to syncopated piano in the breakdown section, as listeners are urged by the lyrics to find (and love) each other in the middle of the dancefloor.”