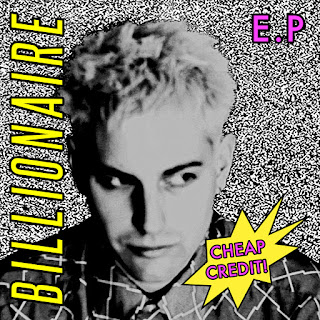 Prolific songwriter John Sterry, aka Billionaire, will release his new EP, Cheap Credit!, on 31st March via Blue Mary.
The first track from the EP, “Reasons To Be Fearful”, is smart and scathing, irreverent and profound, and  sets the tone for an album that will reward listeners who value songs with real lyrical substance, as well as impeccable minimalist style. Socially-cognizant yet slightly apathetic, this track is a response to being constantly bombarded with news that the world is ending and we’re all about to die. It presents a surreal list of concerns, from “man-eating spiders” to “great white sharks off the Southeast Coast”, before directly addressing today’s zeitgeist with allusions to “Russia getting bold” and “Sharia Law”.
Sonically, Sterry sites influence from a range of leftfield musicians such as Metronomy, Can, Talking Heads, Jonathan Richman, and Rexy, although on Cheap Credit! it is another of his heroes, Tom Waits, whose influence is apparent in the witty, sardonic songwriting. Self-produced at YiaYia Studios, new EP builds on Billionaire’s previous offering (the stellar Fine Minds EP) by developing rich, interesting musical textures – from the major-key synth lines of “Reasons To Be Fearful” to the dark backbeat of “World Loves A Trier”
Fresh from touring as frontman of seminal post-punk group Gang Of Four, Billionaire’s brand of lo-fi electronica is wry and cutting, and showcases him as a compelling, idiosyncratic voice on the contemporary British scene, whose work is full of humour, anger and pathos.
Billionaire Upcoming Shows:
29th March – Discovery 2 Showcase, 299 The Venue, London
29th April – City Sound Project @ Westgate Towers, Canterbury
27th May – Unfest, Tunbridge Wells, Forum Main Stage
15th July – Zooquarium Festival, Hasting Pier
Watch the video for “Reasons To Be Fearful”: