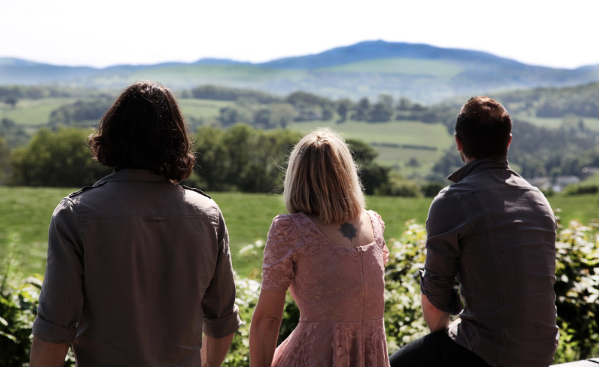 In commemoration of the 10-year anniversary of their debut album, A Balloon Called Moaning, The Joy Formidable debuted both English and Welsh language acoustic versions of ‘While The Flies’ / ‘Tra Bo’r Gwybed.’ The tracks were debuted by Huw Stephens on BBC 6 Music. The double album of the acclaimed release is expected November 1st via Hassle Records. Included with the original 2009 EP will be the acoustic Welsh language version, Y Falŵ​n Drom.

The Joy Formidable has always felt it important to recognise and emphasize the significance of their Welsh heritage. In the anniversary edition, they revisited each song and re-worked them acoustically, and again in Welsh. Ritzy explains; “We’ve been through such a lot as a band over the years, it’s been a really reflective studio session, returning to the old recordings and transforming them into these beautiful stripped back, intimate versions. It’s exciting hearing them in the Welsh language because now they have new life too and can be a celebration of language as well as memory.”

In celebration of A Balloon Called Moaning / Y Falŵ​n Drom, The Joy Formidable will also be touring UK & North America from Nov 22nd (dates and ticket information below).

Tickets https://www.thejoyformidable.com
The commemorative album will be available on CD and coloured vinyl, limited to 1000 copies. You can pre-order HERE. For now, enjoy the latest single ‘Tra Bo’r Gwybed,’ which features an English version as a bonus b-side (not available on the album). Listen to both versions HERE.