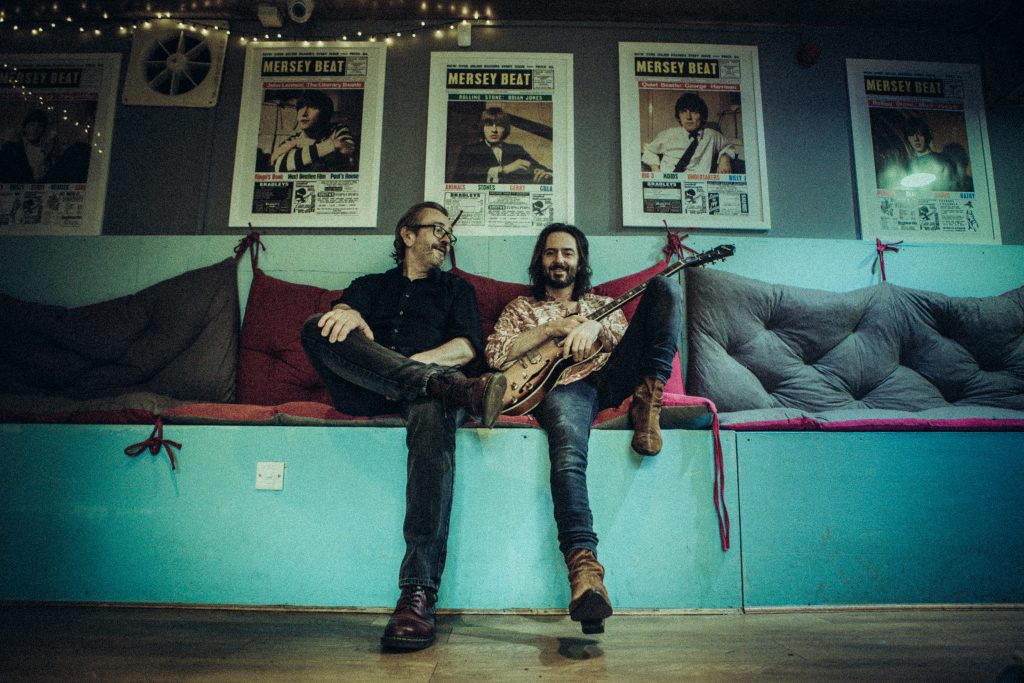 Oxford duo – SKATES AND WAGONS – have unveiled their debut studio release: ‘#EP’. Released on White Label Records, it will be available everywhere now.

Channeling the psych-pop wonderment of The Small Faces via the expansive classic rock of CSNY, the band’s eclectic, retro-shaded new release is at once epic, accomplished but arrives with a healthy dose of unconventionality.

Comprising the duo of Adrian Dacre (Drums) and Carlton Taylor (Vocals, Guitars, Keyboards, Percussion), the ‘#EP’ may be their first official debut release, but carries the air of a band with plenty of experience under their belts.

Long established faces on the live circuit, the pair’s mutual passions for performance and music comes to a head in Skates And Wagons. Dacre has played music for over 30 years, working  previously as a session drummer for such acts as Badly Drawn Boy and in production projects at Courtyard Studios, whereas, partner in crime Carlton has lived a lifelong career in performing arts and will be familiar to fans as a former member of Metro and The Details.

While Dacre serves up invaluable studio expertise and Bonham-esque percussive flourish, there’s a grittiness of vocal and tautness of songwriting in Taylor that comes straight from the schools of Elvis Costello, Paul Weller, and Harry Nilson. A match made in heaven, their potent chemistry becomes squarely into focus on their first outing together, the: ‘#EP’.

Initially starting work on the release as far back as 2011 and completed earlier in 2020, Skates & Wagons’ first EP is a testament to that old adage that you can’t rush art. Taking a nuanced approach to sixties-indebted structures, the four songs on offer here are at once instantly familiar, but packed with surprises.

EP opener “Just Because You Can” lands like the lovechild of The Small Faces and The Kinks at the height of their acid-washed Mod-ness. Starting out as two separate songs, they eventually found harmony in the comfortable setting of the band’s home studio as one accomplished entity.

Elsewhere, the out-of-this-world theremins and seminal Hammond organ sounds of “Spin My Wheels” make it a time-warping trip to a different era. Only the third song the band ever recorded together, they operated with a strict rule to only employ “classic sounds” in its creation and its telling.

Paying homage to F Scott Fitzgerald, “Tender (Is The Night)”, owes its namesake and imbued sense of melancholy to the work of the great american novelist. “I adore the bleakness of his writing, and maybe subconsciously helped me keep the verse lyric direct and simple” says Taylor. With a distinct Beatles flavour to its sound palette, Skates And Wagons knowlingly salute some of their own personal stand outs by the Fab Four, in particular the b-side classic “Don’t Let Me Down”, ‘All Things Must Pass’-era Harrison and Lennon’s “Hold On”. “Some of my favourite tracks had seeped into this one’s DNA.” he adds.

The collection closes out with “Law As I Am True”, a track built around a reliable Rock’n’Roll 50’s chord progression, before unfolding into a cinematic opus in miniature that stretches well past the six-minute mark and into the sunset with sweeping crescendo.

Nine years in its making, there’s a palpable feeling that these songs have lived, grown and matured with the band over time. Undeniably a labour of love, ‘#EP’ is every bit worth the wait.

Recorded at Dacre’s home studio in Watlington, Oxfordshire, the EP was produced by Skates and Wagons. It was also engineered and Mixed by Adrian Dacre.

With another ten or fifteen tracks recorded during the same sessions and in the pipeline for release, the band are already planning their debut album for release next year…. Stay tuned for more news from Skates And Wagons very soon.