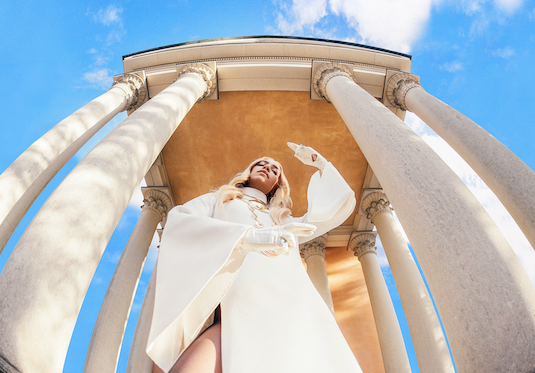 The new release follows 2019s anticipated EP Nothing Can Compare, and the single Goodlife, and acts as the first taste of new music from the captivating crossover artist.

Fingers Crossed is a mediation on desire and romantic expectations with an accompanying pulsating beat. The paring creates a sparkling dance anthem. Channeling a 70s disco queen, Agnes sings I got my fingers crossed, You’re not a holy ghost, Too Good to be true, Can’t take my eyes off of you, conveying the conflict between the enthusiasm of attraction and perhaps more bitter reality. The almost fantastical production of the song along with the chorus of distorted voices at the end of the track embodies this message. Fingers Crossed is Agnes’s incandescent sonic exploration of pop.

On the release Agnes explains “Fingers Crossed was inspired by the sense that nothing is impossible, because nothing is impossible! Its a song that can lift you up to new dimensions and like a peaceful tank it crushes everything in its way. The song does not excuse itself and I dont excuse myself. I welcome you now to my party, and its my party so… I can do what I want to.“

The music video for Fingers Crossed was beautifully directed by SWIM CLUB and inspired by Alejandro Jodorowsky’s ground-breaking cult classic The Holy Mountain from 1973 and Swedish abstract artist Hilma Af Klint. The collaboration between Agnes and her team of creatives was very much spiritual as Agnes explains, ” Music for me is very spiritual and as an artist I see my work is to open up to myself and others to create something bigger than what we are.“

With nearly 1 million monthly listeners on Spotify and over 100 million cumulative streams worldwide, Agnes has established herself as an internationally renowned pop/dance artist. Her 2008 classic ‘Release Me’ saw Top 10 acclaim across Europe, amassing over 38 million total streams and selling over 900,000 copies in the UK alone. The recent 7-track EP is inherently-Agnes: filled with deep house beats with flairs of glittery RnB and boundary-less Pop. Agnes describes the EP as exploring the unknown, honing in on the feeling of freedom that comes beyond all of this – feeling care free and just focusing on the euphoria of the present. She says, “On the dance floor, there are no rights or wrongs. You just are.” Agnes took a year and half off to reset, traveling around the US, Mexico, Europe, and Northern Thailand. I wanted to develop, try new things meet new people, explore, and a lot was about liberty: both physically and mentally, she says