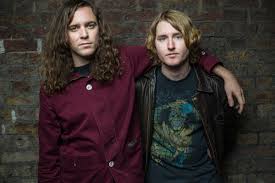 They also found themselves at a crossroads: keep flogging away on the road, touring relentlessly and continue to solidify their position as one of the world’s most joyously raucous live bands…or, after 10 years as a band, aim for something bigger, something grander. Positive Rising: Part 1 is something grander. After all, who releases a double album in 2019? A band not content to do the same thing over and over, that’s who.

Following Bloody Lovely’s demanding touring schedule—and now with third member Lachlan Ewbank along for the ride full-time—DZ Deathrays found themselves with more song ideas than they’d ever had. So the now-three-piece decamped to the same “freezing cold, probably haunted” house in Yass to “basically sit around writing doom-rock riffs,” laughs Simon. “But Shane had hit a purple patch and there were lots of song ideas around; more than we’ve probably ever had before.”

The addition of Lachlan as a full-time member of the band meant a new set of ears to bounce ideas off, and a new set of riffs to dig into. With the members all still living in different cities—and their usual writing process of sending ideas back-and-forth constantly, and then meeting to jam them out—the Yass excursion fleshed out this new vision of DZ Deathrays. “Lachlan now being a part of that was really cool and new,” explains Shane. “It added elements to songs that I just never would’ve thought of, and it also let me concentrate a bit more on being a vocalist. So we had all these new, cool ideas, and we jammed them out.”

“Shane would send me riffs and ideas for lyrics over Messenger,” adds Lachlan, “and I’d add my own twists and ideas: it was great to be a part of the process and see how much work goes into making a DZ Deathrays record.”

So doing things the way they had before, well… that wasn’t big enough. Not challenging enough. Not out of their comfort zone enough. So they did what every band worth their salt and wanting to change things up does: go record the first half of a double-album opus in LA with producer Miro Mackie. “It was an easy decision,” explains Simon. “I mean, so many of our favourite bands have gone there to record… plus, I’ve known Miro since college and he’s been doing gnarly stuff that we’re really into, so going to LA to record just felt right.”

It was definitely out of familiar territory, challenging them to break DZ Deathrays down to its constituent parts, and build it back up while not being able to simply fall back on the way they usually did things. “We didn’t even take any gear,” laughs Shane. “I think we took like, a guitar… maybe some pedals. So we got there and kind of started from scratch, which is what we wanted to do. Shake things up for ourselves.”

They also got to use a couple of mates in the process: Kirsty Tickle adding some sax, other friends adding shouts and backing vocals… and a distinctive scream on ‘Year of the Dog’. “Matt from The Bronx, one of our all-time favourite bands, drove an hour from his house, came into the vocal booth and nailed his part on, like, the first go,” laughs Shane. “I felt bad for making him drive so far. But it was also just a showcase of how good a vocalist he is… and that was unreal for me, because now with Lachlan in the band, I’ve been trying to approach things from a vocalist’s perspective, and it shows you how hard you’ve got to work.”

Putting their new tunes in the ‘gnarly’ hands of Miro paid dividends immediately too. “Miro has a pretty unique approach to working,” recalls Simon. “For one, he’s an amazing songwriter himself, so it was really collaborative; he helps shape things and expand on things almost unconsciously. And secondly, he keeps pretty regular hours: like, we usually wouldn’t work past 10pm. In the past, we’d be up til all hours working, and Miro’s approach of ‘let’s give it clean ears tomorrow’, I think, really helped. You can get too up in your own head, this helped get a little distance from things. I always later think ‘oh, I wish I’d done this instead’. This way we had space to figure that out… and also to screw around with all the extra stuff we wanted to do.”

And there’s a LOT of ‘extra stuff’, especially for a band that used to stress about adding things to records that — as a two-piece — physically couldn’t be played live. Positive Rising: Part 1 bucks and heaves with disparate, heady atmospheres and avalanching instrumentation that pushes the DZ Deathrays into corners they’ve never visited. It’s evident in the swirling swagger of ‘Snakes’, ‘Still No Change’s’ sparkling punk insouciance, the moody and atmospheric ‘Hi Everyone’, the pummeling riff attack of ‘Nightmare Wrecker’, the ferocity of ‘Year of the Dog’, or the predatory-eyed sawing thrash of lead single ‘IN-TO-IT’.

What’s on offer is a DZ Deathrays that swings quickly from leaner and meaner, to blown-out and expansive — and sometimes downright weirder —  while still packing enough punches to be destined to soundtrack flying bodies in mosh pits the world over. “All the keys, the synths, whatever; we felt comfortable adding extra things because we’ve now got Lachlan to help play it. We wanted to make this an album that felt like an album. The last few records were us trying to write flat out bangers all the time,” Simon laughs, “this is us expanding on that: trying to write a kick-arse rock record, but leaning into the experimentation. This started off as weird doom-rock riffs in a haunted house, and evolved into something very different.”

As for their reluctance to have things on record that they couldn’t play live? “Too bad,” laughs Shane, “we’ve done it now. But that’s the evolution part of this for us,” he adds. “We can look at DZ Deathrays on album as one form of the band, and DZ Deathrays live as another one. Both are important, and both let DZ Deathrays be what it needs to be… and that’s really cool.”

So the grand challenge is set: an unleashed, double album of DZ Deathrays, with Part Two of Positive Rising set to be recorded with Miro Mackie at The Grove in late 2019. But that’s DZ Deathrays: they do what they want to do… and positivity rises with them.