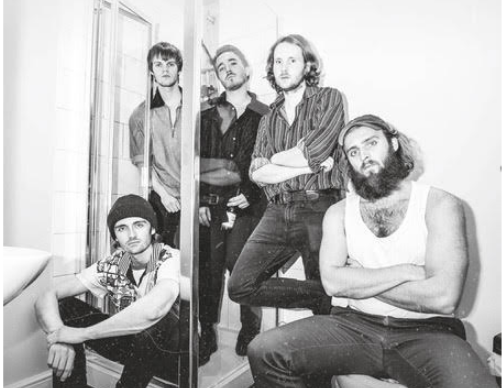 This new tour announcement follows the band’s recent BBC Radio-1 supported single ‘Care Less’, which has been going down a storm with the station’s indie guru Jack Saunders. Clocking in at a neat 2’30, ‘Care Less’ is a rush of pure adrenaline from the moment go. Produced by Dead Nature and Spring King talent: Tarek Musa, the track was quickly laid down in a matter of days at Whitewood Recording Studio, Liverpool, with additional mastering by Mike Cave (who recently mixed and mastered Lewis Capaldi’s latest chart-topping album).

The quintet also teamed up recently with director and videographer Sam Crowston (The Blinders/No Hot Ashes), to produce a humorous new video for the track, as-filmed at Sheffield Hallam University.

The 2020 dates follow a frenetic year for the band, that seen them release new tracks including their sensational recent single ‘Popular Music’ and ‘Care Less’, win over crammed halls at Dot2Dot in Nottingham, Manchester and Bristol, but also play to heaving hometown crowds at both Tramlines Festival in Sheffield and at their recent gig at the city’s capacious The Foundry venue. Sealing the deal on a summer of groundbreaking shows, SHEAFS were also crowned ‘UK Talent Winners’ at Mad Cool Festival in Madrid this year.

Following a stint of high profile support slots with the likes of The Amazons, The Coral, and Idles, plus their recent tour with US rockers Greta Van Fleet which saw them win over audiences all over Europe, the band now look to channel all of their energy and experience into some unmissable shows in the new year.

Sheafs appeared in a feature on Relish Rock