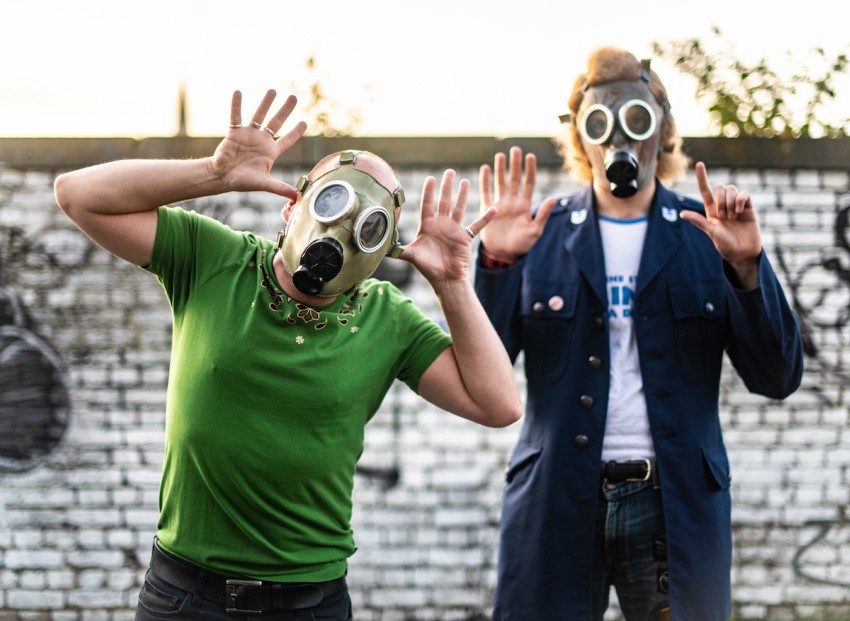 Q&A with London-based music duo Charlie And The Oscillator

They have become experts at twisting and bending sounds into their own distinctive style using a vast collection of vinyl 45s. Their endlessly intriguing world has already drawn comparisons to the likes of DJ Shadow and Death In Vegas.

What are some of your earliest memories of music?

Playing an early Beatles vinyl on a plastic toy record player and hearing yellow submarine, and then discovering the Beatles White album and realising even the masters of Pop experimented and broke the rules. There’s such variety on there, a total range of genres.  Other memories are hearing early acid-house beats from the late 80s coming into the mainstream.

Dancing to KC and the Sunshine Band’s “that’s the way I like it” in front of a group of old people in Florida at maybe age 5. Hearing Huey Lewis and the News in Back to The Future, as well as Alan Silvestri’s fantastic soundtrack. Being terrified by the Pathe Films logo fanfare for some reason. Thinking Moby’s Natural Blues was about a colander and being told off when I nicked one from the kitchen and started singing the song whilst holding it above my head.

We create demos out of all kindsa things and then rearrange them chop them up and add analogue synths and drum machines.  We also add a load of really crazy samples and send it back and forth.  It’s like a game of ping pong between each other.

I listen to something like four hours of Boney M, start humming a tune in my head and then fall asleep. Don’t really remember the rest. It’s a lot like going to the toilet. You consume all this stuff and then think you have a good idea of what’s going to come out the next day. Sometimes you produce what you were expecting, but mostly for me I just kind of sit back and wonder how it came out looking the way it does.

For me, its the Studio cos songs take time to build.  One day you’re not interested, and the next day you can’t get enough!  It’s a real drug.  Live on stage is always fun though, as its unpredictable and ya can’t beat a really mental crowd.

Being on stage is a social thing and really feeds the soul in a certain way. But it takes so much planning to play on stage sometimes, so you’re not necessarily thinking about the music while you perform.  Making music at home is easier, cause you don’t need to worry about things going wrong and irritating the audience. It’s similar to cooking, you’re not going to experiment and go crazy when you have a room full of hungry guests waiting. You’re just going to want to make an edible meal. But when you’re cooking for yourself, that’s when the real awful messes happen, and you might create something world-class. Just remember to keep a record of what you are doing.

Being compared to DJ Shadow was pretty big, he’s obviously a bit of a pioneer and he changed the landscape.  And also “Tron videogame music” haha.

When people say it sounds very unique or struggle to compare it to anything else. I think that’s my goal deep down. Without making it sound unlistenable, of course.

If you could put together a radio show, what kind of music would you play?

I used to host one. I played whatever I felt like. Sometimes Hawaiian steel guitar and sometimes trip-hop.

Mitch Ryder and the Detroit Wheels – The Complete Recordings

To bring back the great sounds of the past that have been lost, or fallen by the wayside.  Success for me is releasing a solid collection of albums, at least 4 or 5, each with its own unique identity and sound.  Records that will stand the test of time.

Make the world a happier place. Stuff is often pretty shitty it seems at the moment. For some reason most new music I come by is miserable too. Fuck that, I don’t believe in sitting there while the world collapses!

Everyone has the power to change the world for the better and the first step is changing your outlook. I hope that our eccentric brand of happiness comes across through the music. Music has always been able to make me happier and I want to inspire people to do the same thing.

One last thought to leave your fans with?

CHARLIE:   This is just the beginning.  All hail Charlie And The Oscillator! THE OSCILLATOR: Use your creativity all the time. It’s the only thing that separates us from the animals, ultimately. Want to change the world? There’s nothing to it.