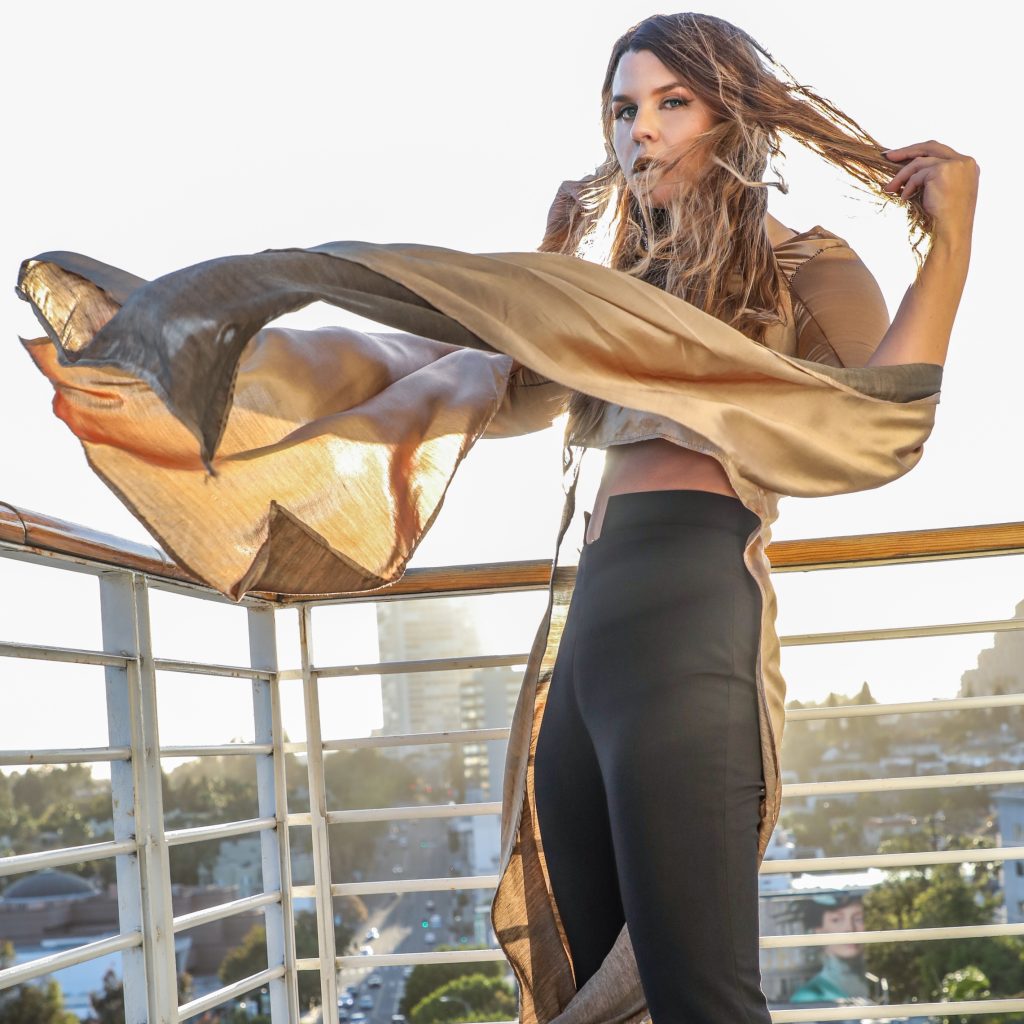 Madeline Rosene’s music video for latest single ‘Everday Existential Crisis’ is an engaging spectacle lyrically and visually. Set to feature on her album of the same title in September via Artist Formula Record Group, we wait in eager anticipation after hearing these personal lyrics that could easily touch home with its relatability. ‘Everyday Existential Crisis’ speaks on not being true to yourself and living a double life and in turn making the ones you love feel like they cannot trust your word. Raw and evocative, the songwriter dives deep into her thoughts and we are delighted to share an exclusive Q&A with Madeline Rosene below.

I honestly can’t remember a time in my childhood when my life didn’t revolve around music. My favorite parts of school involved music. In music class in elementary school, we had to memorize a song that listed every president of the United States in order. I remember all of it. For any musical productions I was involved in as a kid I generally remember all of the lyrics. My brother and I had a rock band in the Cleveland/Akron, Ohio area when I was in middle school and he was in high school. We played gigs all over Northeast Ohio. I started going to a recording studio in NYC when I was sixteen. It was in the basement of a music store downtown.

My new single, ‘Everyday Existential Crisis’, is the title track of my upcoming album which will be out on September 16th. The song was born because I tend to reflect on my life choices, wondering if I’m taking the right path, if I have made the right decisions, and if I am living truthfully or lying to myself. I suppose it could be posited that when you lie to yourself, you are also lying to the people around you, particularly the people closest to you. The song is about worrying about disappointing people you love. It’s about getting close to someone who maybe you shouldn’t get close to because you don’t even know yourself enough to be trusted. We often crave safety and familiarity, but how do we trust our own feelings? When you don’t know yourself very well or don’t care to know yourself, every day can feel like an existential crisis. At any moment, you could pivot. Life is improvisation.

Big thanks to Bob Varo for producing this track!

Usually, something will happen that strikes a chord (sorry). Maybe someone hurt me, I hurt someone, or someone said something that I thought was poignant or that rubbed me the wrong way. I generally write about something in my life that I can’t stop thinking about – a person, a conversation, a feeling, a thought, or maybe some kind of abstract idea… Then I will pick up my guitar and try to take the emotion that this thought is provoking and capture that in a chord progression and melody. I might start humming the melody and then coming up with words that fit it. Other times, I have written lyrical phrases down throughout the month or week, and I’ll pull from them and try to make them fit and start putting them together like a puzzle.

But I don’t really take any regular steps. I don’t light a candle, meditate, and get my fuzzy pink pen out and outline a song. I wish I was that organized…I wish I had a fuzzy pink pen. It’s just sort of an organic thing that happens as a consequence of being emotional about something.

I invest more now than I used to. I work with a publicist, distributor, and social media team. For me, it’s less about how it’s received, and more about how many people will receive it. I know my music isn’t for everyone, so that is why it’s important for a lot of people to hear it…so that eventually it will get to the right ears.

There is this really cool woman who started talking to me on Instagram a couple of years ago. She lives in Sweden. Her name is Karin. She is an avid live music fan and has been listening to my music for a while. This is a direct quote from her that I received on Instagram: “Hi, I have spent the afternoon with you in my AirPods, and I have to admit that I love your album. Especially fond of ‘Blew’, ‘Late’ and ‘19th One Night Stand’ (love the title). Your music actually helped me tonight…Me and my horse Cotton encountered a moose while walking in the dark on a road. We heard a noise and saw a big shadow on the right side, we were both scared as sh..t. Once we had put a few meters behind us and the moose, I put on your music on my cellphone, on a very high volume, and this made us brave enough to turn back to the stable. So big thanks to you from me and Cotton for helping us out.”

This will probably always be my favorite story that includes my music. She sent pictures of Cotton and he is the most adorable horse I’ve ever seen. I love the fact that her life is so different from mine (and so cool), but she likes my music and it means something to her. It really fills me with joy. And I love that my music made someone feel brave. Bravery is very important to me.

What a cool question! Yes. I was a journalism major and one of my favorite classes was called The Longform Narrative. It was taught by Pulitzer Prize winner  Madeleine Blais. After college, I wrote for magazines and was an editor for a while. I like to document things. I have kept a journal since the third grade. I also love reading non-fiction short stories. I think my songwriting is influenced by this in the way that my songs document parts of my life and my experiences or just a passing feeling. So, I would say that some of the things I learned as a journalism major inform my songwriting process. Things like using verbs instead of adjectives for crafting a description because actions are easier to visualize, using direct quotes (things people have said to me that inspire a song), and in general listening skills, deeper curiosity, and patience. If you want to be inspired, you have to listen and soak in the world around you.

I was recently featured on a song with Dante Juhkel. It’s called ‘Muse’.

I have another single coming out on June 3rd and my album will be out on September 16th.

Try to love yourself, even if you haven’t quite figured out who you are yet.