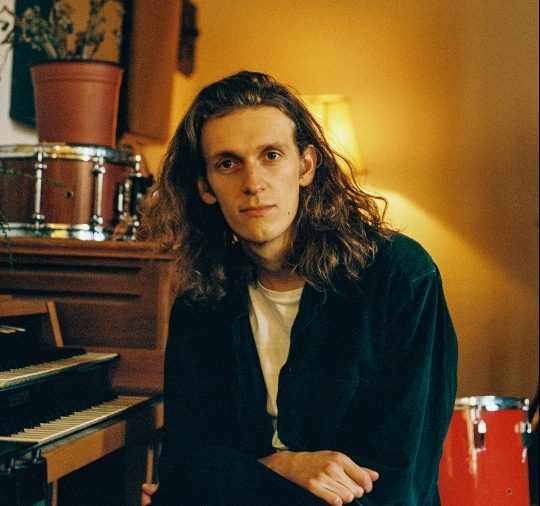 Setting the stunningly stirring new track against an equally moving backdrop, the new video was directed and edited by Louis and features a cameo performance from the song’s star and subject matter — his grandad.

An apt accompaniment to the artist’s tale of his grandparents’ relationship through the years, the affecting visuals offer a brief snapshot of an enduring and endless love told through a vast collection of photographs, notes and drawings. As Louis explains:

“The video was shot in three parts. The first two with actors to represent younger versions of my grandparents, and the rest was made up of my grandad and his array of scrapbooks and sketchbooks — he’s written his life story out into about eight books, all full of pictures and drawings and paintings and funny anecdotes.

It tells the story of my grandparent’s many cycling trips around Europe, from their first date to their wedding. It includes pictures of our whole family. I wanted to make something that celebrated their life together and all the memories they’ve made, and not create something that’s too sad.”

Following on from his earlier release “Hannah’s Got A Way”, “Where Did The Time Go?” is a raw and rousing testament to Louis’ skill as both singer-songwriter and pianist.

Pinning together dazzling piano lines with dramaturgic choruses, the track is as scintillating as it is stirring: heart-wrenching enough to catch a lump in your throat, but shaded with all the optimism of a young person with the world at their feet.

A song that speaks to the classic romanticism of the past as easily as it does the rose-tinted blossoming of the future, Louis explains:

“I’ve always looked up to my grandparents and thought they had the best love story ever. They’ve been together so long and my Grandad still loves my Grandma no matter what — just as much as he did when they met — and I thought that was so inspiring for someone my age.

I guess I realised that I wanted to live a love story like that too. I wrote the song imagining his perspective and all the memories he’s collected over the years with my Grandma, in turn imagining all the memories I hope to collect in my life.”

From his beginnings as an outcast in music class, Louis Coupe has forged his own innovative path through a sheer passion for music. Fashioning together a diverse yet classic sound, the songwriter channels the timeless songbooks of the 1970s into his introspective piano-led pieces.

After receiving a surprise ticket to see Elton John at the age of 12, a young Louis became instantly obsessed with the pioneering musical greats — The Beatles, The Stones and ELO. Spending hours searching for tutorial videos online, Louis set about teaching himself any instrument he could find.

Over the next decade, Louis notched up over a thousand live shows under his belt and honed his craft the old-fashioned way, performing anywhere that would take him — from the smallest of clubs and pubs to friends’ front rooms, firework displays, cruise ships, canal boats, ice rinks, so many empty nightclubs, golf clubs, shopping centres, cricket clubs, Wolves football stadium at halftime, and many more. More recent highlights include performances at BBC Radio 1’s Big Weekend in 2020, the iconic Royal Albert Hall and his recent debut headline show at London’s Servant Jazz Quarters — a moment he had waited his “whole life” for.

LOUIS COUPE – RELEASES OFFICIAL VIDEO FOR: “WHERE DID THE TIME GO?”

OUT 11 OCTOBER, VIA LEAFY OUTLOOK