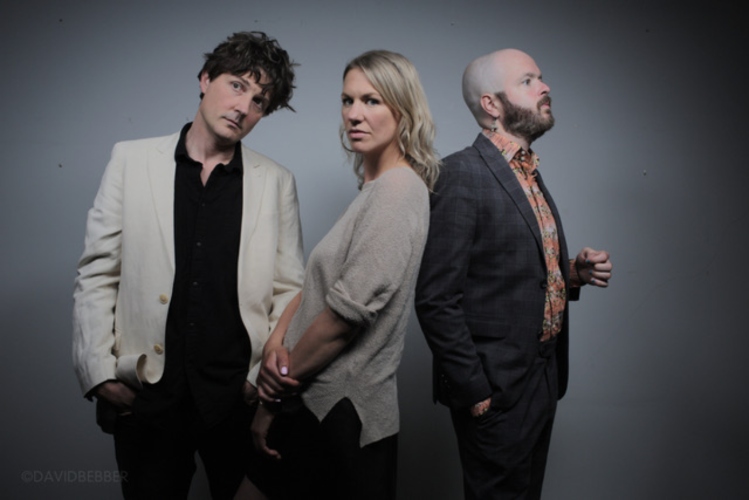 Books unread and rings locked away in a tale of loss-free of recrimination When the Butterflies Come Down is the lead single from Maven Grace’s breath-taking debut album Sleep Standing Up released on 3rd March 2023.

This search for hope and the extreme places to which it takes us is the very journey that brought Maven Grace together. For Henry, Mary and Tom, the themes of bereavement, divorce and finding the strength to keep going, permeate lilting pop structures and expansive orchestral flourishes throughout their debut album.

“All these songs have a sense of hope and empowerment,” says Mary. “When people listen, I want them to understand that the real message of the songs is ‘Trust me, it gets better’. Just keep going and things will turn around. In a way, the band itself embodies that idea, because we’re very old friends who support each other.”

These songs are borne out of personal journeys and geographical ones too, from Bryan Ferry’s Avonmore studios to Beijing’s underground music scene the group sought defiant positivity amidst turbulent times.

For Mary, lockdown brought about heartbreak and the ending of marriage – referenced in the album’s opener Me Versus The Volcano and in this single When the Butterflies Come Down – while Dark Blue Heaven addresses her formative experiences in clinics, witnessing as she says “friends whose personalities literally disappeared under the effect of the ECT machine”. Meanwhile, Henry’s job as a human rights barrister has meant consistently witnessing the fallout of humanity at its most desperate. It is perhaps no surprise that tracks like Lone Star’s maximal dream pop question the identity, of who we are and where we come from.

“That song in particular is about tracing the distance between childhood dreams and where we end up,” he says. “I’d been thinking about the old Roxy Music song 2HB, which I’d always thought was named after a pencil, but is in fact a reference to Humphrey Bogart. Somehow that got me thinking about Clark Gable and the idea that it’s not necessarily a good thing for your dreams to come true.”

Roxy Music is a name that quickly became synonymous with the trio. It was at an early Maven Grace gig at 2018’s Standon Calling that they caught the attention of Bryan Ferry and an invite to his Avonmore Studios. Here the album took shape, as the band pulled together demos first worked on in their respective homes, inspired by the array of analogue synths and keyboards.  They were joined by bassist Charlie Jones of Roxy Music aficionados Goldfrapp, his playing providing the probing pulse of Time Stands Still’s roaming chamber pop.

The journey to complete Sleep Standing Up took them far beyond the rock canon. Diana Galvydyte, a member of the Lithuanian Philharmonic, was approached after Mary saw a clip on YouTube of them playing a Bruch Concerto. Handily enough for the trio, the only pop music she confessed to being a fan of was… Roxy Music.  The group also went out to The Conservatory in Beijing after getting to know erhu player Yu Hongmei via American professor of electronic Kenneth Sharp.  The two-stringed instrument’s distinctive, almost human voice-like tones can be heard in Darkness.  It was a journey to the Beijing underground and performances at several illicit gigs that perhaps left the deepest mark on the group’s music, though.

With Chinese authorities reticent to publicise hardcore punk and experimental, the group were taken by the local musicians’ desire to make and perform the music they love with no expectation that it would even bring them any attention, let alone fame and fortune. “Their attitude was that it’s worth doing for its own sake” says Henry.

Maven Grace was formed when teenhood friends Henry and Mary re-connected with Tom at a mutual friend’s wedding. White has been something of a musical polymath across 20 years, a co-founder of the psych-pop group Electric Soft Parade, a member of 00’s indie four-piece Brakes and a session musician for numerous acts including Patrick Wolf, Sea Power and Graham Coxon. Working with Maven Grace though offered the incongruous sense of getting to know each other musically but in the context of friendships that had been forged years previously.  A long-standing friend of Henry’s and providing an all-seeing eye overproduction is Chris Merrick Hughes (Adam And The Ants / Tears For Fears / Lloyd Cole / Robert Plant).

Sleep Standing Up – whether coincidentally or otherwise – has the feel of a band who’ve been at it for years. From the wide-open spaces and lift-off of the opening track Me Versus The Volcano’s Lynchian take on Sigur Ros and its slight melodic recall on the string-laden crescendos of Darkness, to When the Butterflies Come Down’s melancholy keys and graceful sonic arcs, each track retains its poise – a sense of sad grandeur – even as its subject matter invites the group to be vulnerable.