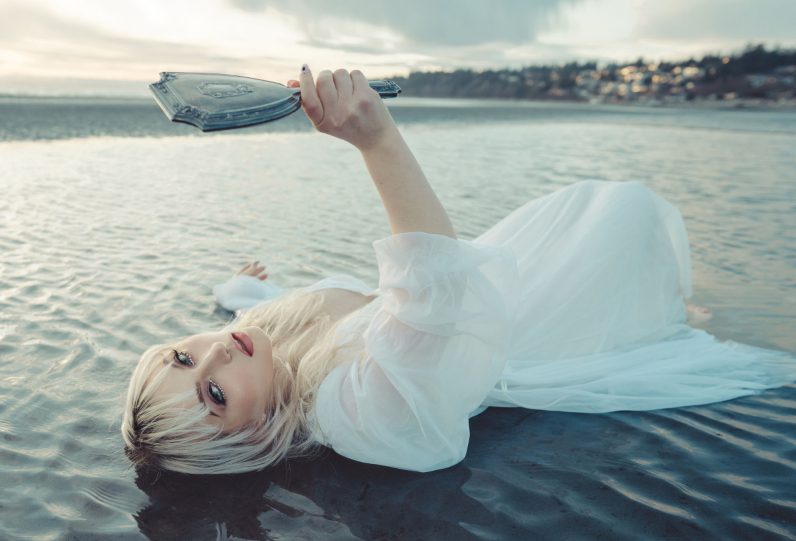 A star in the making, sultry singer Sofia Evangelina has released her latest single ‘Get Outta My Head’ under Tsarina Records, a song that dives to the ocean floor, where pearls are found, and swims between emotive chords and commanding vocals. She stays the course, not so much as drifting in the shallow gusts or gripping tides. As elegant as a water nymph, she twirls and glides across a surface of aching lyrics, all the while her buoyant tones ripple, carrying her bottled love to unknown shores. We interviewed the young songstress to discover her muse:

Stream/ Buy ‘Get Outta My Head’

Was there a specific love story that inspired you to write ‘Get Outta My Head’?

I see, you want me to spill the tea… well at the time, I wrote “Get Outta My Head” based not on a particular relationship but rather inspired from a montage of my experiences, while also tapping into those of my friends and people around me, which is why it’s so relatable. Ironically, I seemed to manifest this situation into my life later on… that’s a different story.

Speaking of love, what was your favourite moment while creating this single?

I loved creating the bridge. For me, that part is the biggest climax of the story, where the chaos reaches its pinnacle. It feels overwhelming and like all these feelings are haunting you, you need to break free for your sanity, some peace.

I owe it all to my mom for introducing me to such a rich realm of musical greatness from a tender age. An important part in my development was my fascination with Andrew Lloyd Webber and his “Phantom Of The Opera” which, like all arias, I had learned by heart. It transfixed me so greatly at a young age that my mother even flew me to Las Vegas to see the live show. But that was only the beginning of my exploration into music. Soon my mom took me on a soul train discovering Soul, Motown, Jazz and Blues and finally I arrived at the movie Burlesque, where I met Christina Aguilera, and that was it, I felt at the time, as though I had seen me, my soul, and everything I wanted to be expressed through the way she sang in that movie. I set a bar for myself right that moment. Discovering Christina led me to discover those who inspired and “made” her. That established an entire new era of learning and molding for young Sofia… And that was only the beginning…

I began with a love for Motown, blues and soul until I landed on my destination, the modern simulation of them all, R&B. As I was a young pro athlete, and surrounded by boys and street culture influence, I became infatuated with hip hop and rap, heavy rap, especially old school hip hop, which I would listen to every day. My favourites were, NWA, Tupac, Biggie, Ice Cube, Dr. Dre, Blackstreet, J5, Public Enemy, etc, to name a few. My love for R&B continued to grow and intensify and my love for hip hop evolved more into modern sounds, drill, trap-soul, and rnb/hip hop mixes. Some of my biggest influences and inspirations today are Pop Smoke, Drake, French Montana, Travis Scott, A$AP Rocky, Post Malone, Ty Dolla $ign, Teyana Taylor, etc. To be most blunt with you, my favourite artists today have been my newest discovery in the last year, and they don’t even make music in English. Most hail from North Africa, but their music speaks to me on a deep level that doesn’t require translation of lyrics to appreciate and feel. To name my top few: El Grande Toto, Inkonnu, Tagne, Stormy, Didine Canon 16, Dragonov, Anas… Their productions are a piece of art. I’m grateful to live in Dubai, the cosmopolitan city, a cross road of many cultural and musical experiences

Musically, it began with this weird, trinket kind of melody that I was playing around with on the piano. I never thought it would be used for a song because it sounded so primitive to me, but my collaborator composer heard it and he was like “that’s dope” and he added on this ‘James Bond’ kind of melody for the verses and the marriage was surprisingly seamless, then “Get Outta My Head” was born and later evolved much in the studio during production.

Lyrically, it was during lockdown when I began to write about what it’d be like to begin to fall unwillingly and uncontrollably in love and all of the feelings that would follow. At the time, the song wasn’t based not on a particular relationship but rather inspired from a montage of my experiences and those of my friends and people around me, which is why it’s so relatable. A story simple in nature, yet complex as it takes us into the realm where the line between the dream, reality, memory, and illusion is very dim…

Ironically, I seemed to manifest this fictitious situation into my life later on… but that’s a different story.

It’s always different! Every song brings forth a brand new experience when making it, which is one of the reasons being an artist is so exciting to me. A song can be so unpredictable. I have written songs in an hour, that came out like a breeze, others have taken me years to conceptualize and they are still a slow work-in-progress because the topic is so dear to me that I didn’t feel accomplished in writing what I want to say lyrically and musically, yet.

I’m very visual though, so I will say most of my music is envisioned in my mind first as an entire concept, with visuals, the colours and the feelings. Or sometimes I hear the melody or beat in my head and I’ll take out my phone and record a voice memo or on the piano. A lot of what you hear in my songs vocally were improvised in the studio on the spot, other vocals I plan ahead and work on with my coach.

It’s so important to me. With my release prior to “Get Outta My Head”, “Endure” I had received such meaningful feedback and experienced the reactions of people listening for the first time. Some people cried, some were teary eyed, asking how I knew to write a song that was made for them, others went into a form of shock and some would even begin to share their entire story of hardship that related them to this song. As an artist, there is nothing more fulfilling than to find your music meaning something to someone, but if it can help or inspire another, or even many – wow, that’s a blessing.

This is such a great question cause I have so many answers coming to mind of beautiful moments, so I’ll share the very first that came to me. This response was from a cover I had done with my spin on it, at age 14. I had someone reach out to me saying they shared their last moments with their father in the hospital before he passed listening to my song on autoplay. I balled my eyes out, I am teary-eyed even now writing this…

My mom’s life stories, her teachings and value system have definitely rubbed off on me and become a part of me and inspire me greatly every day, personally, artistically and otherwise. I’m also very inspired by the world and its vivid, vast array of cultures and traditions. I always want to experiment with different vibes, sounds and cultures to see what new colours I can introduce to my music.

For me, traveling is not only the best form of education but also inspiration. Everything you seek is in the people of the world, especially those who don’t have much and yet exude the truest joy and radiate from within.

Yes! I’ve just completed my 3rd collab of the year, including Afrobeats artists, and we will have some remixes coming too! My next single “Lone Wolf” will be followed by a remix featured version in Hindi! Stay tuned.

Bye b*tches, I’ll be back with vengeance! Jk, I guess you’ll have to find out.