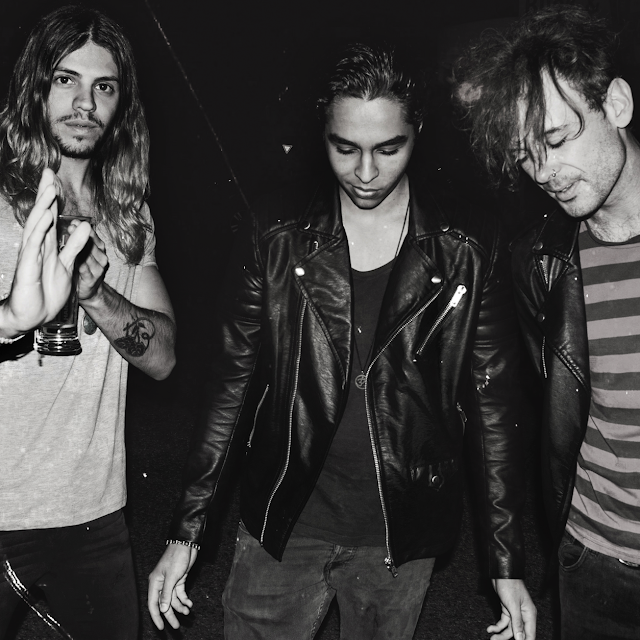 The Deadly Bites are Dean Hibbert (vocals and guitar)  Elio Moavero (bass) and Valentino Moavero (drums) –  a three-piece fuzzy garage band from Johannesburg, South Africa.  Shortly after their formation in 2016 they released their first 2-track EP In Light / Poison, and their 6-track EP The Deadly Bites was released in October.

We chatted to them ahead of Endless Daze Festival about their use of sandwich spreads as a musical medium, and the pitfalls of getting too drunk to play…

On November 3rd, The Deadly Bites are set to perform at Endless Daze festival in South Africa, what are you most looking forward to about this experience?

Endless Daze was beyond amazing last year so we’re ridiculously stoked to be playing this year. As a band we’ve never played a festival and we literally couldn’t have hoped for a better one to get involved with.  So yeah – being on a big stage, in the sun playing music is just a perfect way to spend a weekend. There’s a great vibe there – everyone just wants to listen to good music and have a groovy time with each other.

Which three albums have influenced you the most creatively?

Ty Segall’s ‘Melted’ has been a big influence from the get go.
‘GB City’ by Bass Drum Of Death.
‘Floating Coffin’ by Thee Oh Sees.

Any new artists on your radar?

We’ve been listening to a band called Orb recently, they’re like a bunch of psych-rock tyrannosauruses. They’re not old, just ferocious.

The Deadly Bites’ latest self-titled offering was just released in October 2017, how would you compare this recording session to 2016’s In Light / Poison EP?

The recording of this new EP was waaay different from the last. For one, everything was recorded through a sequenced jar of peanut butter. Nutty crunch, obviously. It was also recorded live, which was different from our first offering. We wanted to make sure the songs were choc full of raw energy as opposed to it being absolutely perfect. It took us two days to record everything. Lickety split. Also, with the first EP we added a lot of sparkles and cosmic dust, which was rad for what we were going for on those songs, but for this one we wanted a more garage-rock feel.
It was recorded in fuzzville, population; reverb.


Studio work and music creation or performing and interacting with a live audience, which do you prefer?

Playing live is absolutely important, you’re feeding off other people’s energy and seeing what’s working and what’s not. So that helps when it becomes time to make new music. We’re always coming up with new ideas, and we’ve taken a lot of time this year to work in the studio and write songs as opposed to playing every weekend.

What has been your most memorable performance so far?

Our favourite gig was probably at Bohemia in Stellenbosch in August this year. It was sweaty and noisy and everyone was so stoked to get involved and boogie. Such a killer crowd and a huge vibe.

And which performance would you prefer to forget?

The three of us have individually had those gigs where we’re too drunk to play, which is always a drag. Those aren’t pretty, but you know – gotta take the good with the bad.

Trent Reznor once said “To me, rock music was never meant to be safe. I think there needs to be an element of intrigue, mystery, subversiveness. Your parents should hate it.” What are your thoughts on this statement?

If you could collaborate with, or perform alongside any artist, who would it be? And why?

Justin Timberlake. ‘Cause JT’s a legend.

Tell us about any upcoming shows or releases you have in the pipeline.

We’re playing a show called Party Freaks on the 11th of Novemeber in Joburg, which will probably be our last show of the year. No other releases in 2017, stop being greedy.

If this doesn’t get me laid, I don’t know what will.