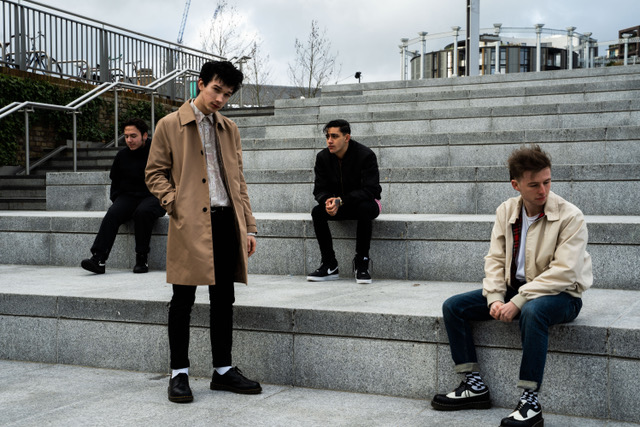 Alive with reverberating melodies and layers of languid synthesisers, ‘Joyride’ is 3 and a half minutes of pure mercurial bliss.

Inspired by that unstoppable feeling of being young and foolish, ‘Joyride’ sees the band revelling in its highs, whilst ruminating on the reckless decisions and life-lessons that line the twisting road that winds towards adulthood.

“We wanted to go for a clean, choppy sound that was Prince-esqe.. Joyride is a more guitar-driven track, and a step into a cleaner and stylised direction after experimenting with different electronic styles.”

Written at the band’s home studio, the track sees the band veering away from the more electronically-experimental offerings of previous, and refining their sound into a vehicle of more purposeful direction. ‘Joyride’ was self-recorded and self-produced by Alex of Deep City, before being mixed and mastered by Jake Day of North Acre Studios.

Deep City is an Indie/Electronic/ Alternative Pop band hailing from Cambridgeshire. Inspired by post-rock trailblazers Radiohead to Everything Everything, pop pin-ups such as Prince to 1975, and a new breed of synth-wave searchers including Jaws and Tory Y Moi; the four-piece channel their multifarious influences into a sound that is eclectic in style, atmospheric to the touch, and endlessly listenable.