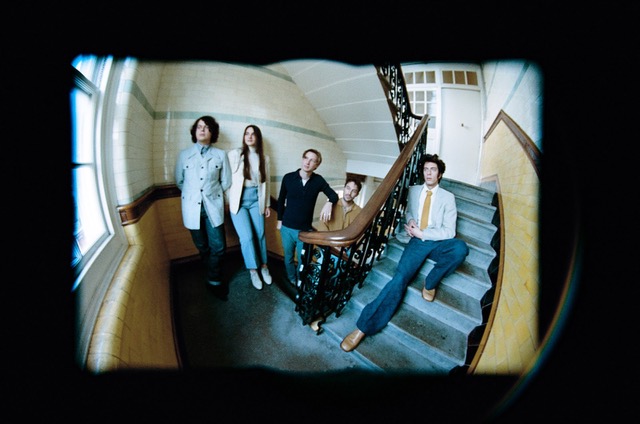 Continuing a winning streak of 70s-tipped wonders that have included the BBC 6 Music championed “Ploy” and the sparkling recent single “You Only”, the London quintet return with a miraculous follow-up track: “Saviour”.

Matching the glam-rock pomp of early Elton John with the technicolour stomp of Supertramp, “Saviour” is a time-warped whirlwind of fuzzy guitars, buoyant retrofied rhythms and rousing piano melodies.

Sporting licks that Lindsey Buckingham or Roy Wood would once have been proud to call their own, “Saviour” was penned by Silvertwin main-man Isaac Shalam and stands as the first he had ever written strictly on a guitar. Its notably radiant harmonies were later overdubbed by Shalam with Silvertwin’s Dan Edery, who amplified its inception-like layerings.

“(Saviour) is heavy and energetic and takes inspiration from the more rocky ELO and Wings songs. The heavy lead and disco rhythm parts are intended to complement each other in the verse. The guitar solo was going through a unique 1950s tube console, which was not intended for guitars but gave it a distinctive sound which we loved.”

“Saviour” is just one of many delights soon-to-be-heard on Silvertwin’s self-titled debut album, which arrives on 16th July 2021. Already shaping up to be one of 2021’s most essential debuts, ‘Silvertwin’, will be like opening a time-capsule of 70s hits you never knew existed. An intoxicating rush of retro-pop nuance and artful nostalgia, think Paul McCartney produced by ELO and you’re part-way there.

With a sound as familiar as your childhood soundtrack, the record is notably blessed with the touching turn of phrase and swooning couplets of frontman Isaac Shalam. Setting-out to create “an album of timeless songwriting”, Shalam explores themes of “young love and the wide spectrum of emotions that come with it” written with heartfelt honesty and endearingly relatable experiences. Recorded to tape rather than digitally, most parts were recorded by Shalam with some overdubs by the rest of the band and session musicians to enhance its warmly authentic baroque-pop feel. The result is indeed a record of timeless feel; lost out-of-time and estranged from its seventies acolytes, yet sounding fresher than ever in the mixed-up here and now of 2021. Yearning to be heard by the ears of all generations, it will appeal to fans of like minded retro-revisionists like The Lemon Twigs or Whitney, as well as fans of the myriad quintessential acts who have inspired it, from Billy Joel to The Beatles, Supertramp to Gilbert O’Sullivan.

The record is masterfully produced by Foxygen’s Jonathan Rado (The Flaming Lips / The Killers / Father John Misty) who has mentored and supported the band from their very earliest days. Providing the record with the classic finish it richly deserves, ‘Silvertwin’ was mastered by Frank Arkwright at Abbey Road Studios and mixed by the legendary Cenzo Townshend.

10 lovingly crafted treasures hallmarked with the songwriting flourishes and the misty-eyed, lovelorn charms of a once golden era for music, Silvertwin will self-release their s/t debut on 16th July 2021.