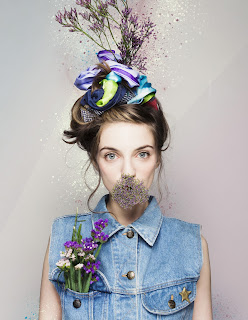 Athens born, Berlin based Sarah P. separated from band Keep Shelly Athens to follow her path as a solo artist and recently released her EP called “Free” which talks about peace & rebirth, renewal, and essentially: freedom. “I wanted it to have many colors.” says Sarah.

Hi Sarah, how are you and what are you up to today?
Hiya, I’m doing pretty good. I’m just listening to the recordings from last week for my first full length. The second week of the production of my album is about to start so it’s really exciting times for my Sarah P. project.

To those not familiar with you, how would you describe your sound?
Pop, intuitive, kind of dark and sarcastic.
What are the 5 albums that have influenced you the most?
Morning Glory: The Tim Buckley Anthology – Tim Buckley
Afou Loipon Ksexastika – Pavlos Pavlidis
Hounds Of Love – Kate Bush
Asa Breed – Matthew Dear
Reflections – Manos Hadjidakis/New York Rock & Roll Ensemble

Which other artists are you into at the moment and why?
I was compiling my wedding playlist that’s full of oldies and I got to re-listen Tony Bennett and Lady Gaga’s album together. She sounds so free and different on this album, which is beautiful considering we’re talking about one of the biggest pop stars of our times.

Are there any key pieces of equipment that you are using to define your sound?
My brain, I guess. I do not freak out with my equipment, I am not a geek, or at least I haven’t become one yet. What is more, I truly believe that even while using the cheapest plugin or instrument, if you put your soul in it, you’re going to have the most special sound.
What would you say some of the challenges artists face today in the music industry?
Where do I begin? The idolization of the producers which opens a big pandora box, from alone. For female artists, the misogyny of the industry. For minorities, the racism and the limited chances. Also, the fact that both press and PR agencies have got in a toxic loop of who’s paying the most money can be seen, which brings independent artists to a dead end. Well, the list of the things that are wrong can go on forever…

Where do you gather songwriting inspiration?
The world around me. My family, my friends, work, daily life. The news can also be very inspiring to me.

Take us through your songwriting process. Are there any particular steps you take when put music together?
Not really, all I need is to sit in front of my computer and start creating something. It will not necessarily end up a song, but I tend to save pretty much all my ideas. I often write the music first and then I come up with the lyrics, but by the time I’m finishing the tune, I already know what I want to say with that song.

What’s the best gig you have ever done and why?
With my old band (Keep Shelly in Athens), I will not forget the last gig I did at Glasslands in Brooklyn in late 2013, mostly because I will never get the chance to perform there with my new project, since it’s permanently closed. As Sarah P., my first show in Berlin at Privatclub was so unique and special that I will never ever forget the warmth I felt, even for days later.

And the worst?
I’ve got to go with my old band again, in 2012 in Clermont- Ferrand. It was the last show of a two month tour, first in the USA and then in Europe. The show wasn’t bad, but earlier that day I’ve been hospitalized because I caught a terrible flu and was completely dehydrated. I guess that experience shook me up quite well and since then I take better care of myself.

If you weren’t a musician what would you be?
I’ve studied drama, so I guess I would be running after roles.

Do you have any information regarding upcoming releases, projects or gigs in the pipeline that you would like to tell us about?
My new video for Golden Deer (out of my first solo EP “FREE”, via my label EraseRestart) will come out soon. A new song will come out in July and of course, my album that I’m currently finishing which will come out early next year.