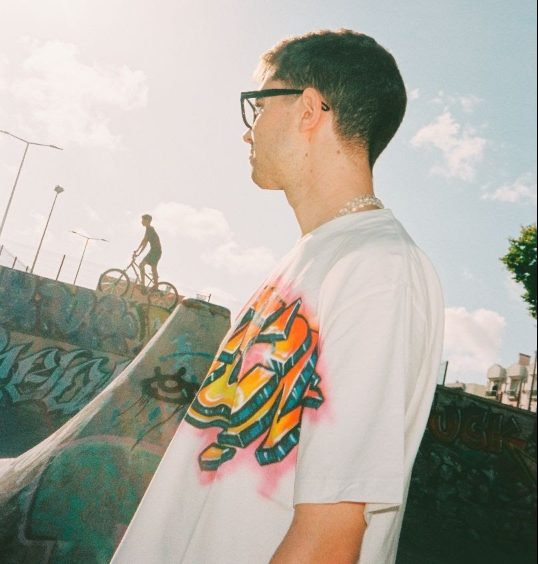 HOLLY unveils his highly-anticipated solo EP Minha Vida – Love via his new iLex Records imprint via InGrooves/UMG, opening the first chapter of his ambitious three-part Minha Vida EP series. Following singles ‘Close 2 Protect’ and ‘Looking For My Peace’, the Portuguese producer examines the dichotomy of great personal loss and professional successes through the complicated and ever-changing lens of love. Healing and spirituality play a large role in the Minha Vida series, with the music of Minha Vida – Love personifying HOLLY’s own inner struggle, beauty, and strength. ‘World Justice’ is the apex of this delicate balance and speaks to HOLLY’s search for meaning during a period of extreme change globally and individually.

The music is HOLLY’s way of processing the emotions that came from this challenging period, with the amorphous and colorful EP cover art acting as the emotional “aura” he felt when writing. He worked closely with artist Michael McAfee to develop custom colors that help represent the complexity of the feelings he was experiencing, which is infused in the music as well.

“This EP is a project where I just wanted to represent how my current life sounds. I wanted to create a project where it’s just me being creative and expressing myself without having other people interfering with it creatively. I feel like in the past years I haven’t been totally honest with the way I sound, since a lot of my work ends up being with other people and I felt like my life was calling me to do a project where I’m just sharing the sounds and ideas of my mind. Most of the EP was created while I was still in Portugal during the peak of the pandemic. It was a time of a lot of thinking about the world and life so I wanted to bring all these stories and concepts into each song and let it talk for itself.” – HOLLY

Playing stages at Escape Halloween, Shambala, NOS Alive, and Coachella, HOLLY’s award-winning production and mixing skills continue to capture the attention of fans and peers alike. With his 2017 win in the first-ever A-Trak Goldie Awards Beat Battle, HOLLY has continued to grow as a multi-talented artist.

Deftly subverting genre expectations, HOLLY has blended the sounds of hip-hop and electronic music in his own enigmatic style. His versatility is shown in his extensive discography. Producing projects for numerous hip-hop artists such as CL, Danny Brown, and Uno The Activist, HOLLY has also collaborated with some of dance music’s most notable tastemakers such as Baauer, Machinedrum, and The Bloody Beetroots. Having released the largest electronic music labels to date, including Insomniac Records, Vision Records, Fool’s Gold, and Monstercat, HOLLY continues to impress with his innovative style.

His mixtape, Dark Skies & Holy Grail, was released in 2020 via HARD Records to critical acclaim. In 2022, HOLLY’s work with Baauer was featured in a pivotal scene of Matt Reeves’ The Batman, starring Robert Pattinson. The key sync placement depicts Pattinson in the now-shuttered Printworks, making the producer’s hard-hitting GRAMMY-nominated collaboration even more culturally impactful.

His upcoming Minha Vida (translating to “My Life”) releases are a collection of highly-anticipated personal works. The first chapter in a trilogy of EPs, Minha Vida – Love will set the stage for Sadness and Hope, to be released on HOLLY’s new imprint iLex. Minha Vida – Love’s debut single Looking For My Peace is a reflection of the producer’s evolution artistically and spiritually, with the emotional aura of the song brought to life by Michael McAfee and influential artist Daito Manabe of leading Japanese design group Rhizomatiks. On “Close 2 Protect,” HOLLY showcases a deep well of emotion punctuated by throttling production. With Minha Vida – Love, this trailblazing artist shows he stands apart from