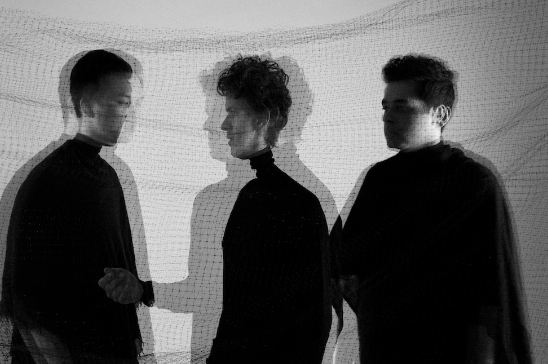 Even for a band dedicated to surprise, Son Lux’s new single “Prophecy” represents a notable departure from their usual fare. Yet the song’s bright energy and lilting feel bloom like an outgrowth of their ever-expanding practice, providing the clearest evidence to date of the band’s indebtedness to the J Dilla–D’Angelo nexus. The track is from ‘Tomorrows II,’ out December 4th via City Slang, the second album in a far-reaching three-volume body of work culminating in physical editions of all three volumes to be released together in 2021.

Featured on the track is vocalist Nina Moffitt, whose upbringing in church and gospel music instilled a fascination with the timbral range of layered voices. Inspired by electronic manipulation, she employs rounded whistle tones, fraying choral hums, and more to conjure a world of sound largely unexplored by the band until now.

On ‘Tomorrows’, Ryan Lott, Rafiq Bhatia, and Ian Chang train their sights on volatile principles: imbalance, disruption, collision, redefinition. But for all of its instability, ‘Tomorrows’ exploration of breaking points and sustained frictional places is ultimately in service of something rewarding and necessary: the act of questioning, challenging, tearing down and actively rebuilding one’s own identity.

Arriving at a time of considerable uncertainty in the world, ‘Tomorrows’ is ambitious in scope and intent. Born of an active, intentional approach to shaping sound, the music reminds us of the necessity of questioning assumptions, and of sitting with the tension.

From the start, Son Lux has operated as something akin to a sonic test kitchen. The band strives to question deeply held assumptions about how music is made and re-construct it from a molecular level. What began as a solo project for founder Ryan Lott expanded in 2014, thanks to a kinship with Ian Chang and Rafiq Bhatia too strong to ignore. The trio strengthened their chemistry and honed their collective intuition while creating, releasing, and touring five recordings. A carefully cultivated musical language rooted in curiosity and balancing opposites largely eschews genre and structural conventions. And yet, the band remains audibly indebted to iconoclastic artists in soul, hip-hop, and experimental improvisation who themselves carved new paths forward. Distilling these varied influences, Son Lux searches for equilibrium of raw emotional intimacy and meticulous electronic constructions.

Son Lux recently expanded the scope of ‘Tomorrows’ even further, launching their own artist-interviewing-artist podcast series, entitled ‘Plans We Make’. It sees the band members take turns speaking with guests about a shared theme in three volumes: Technology, Collaboration, and Voice. The band are joined by multi-platinum record producer Chris Tabron; Sougwen Chung, a former research fellow at MIT’s Media Lab and a pioneer in the field of human-machine collaboration; and Deantoni Parks, avant-garde percussionist and cofounder of experimental outfits Bosnian Rainbows, KUDU, and We Are Dark Angels. More information

‘Tomorrows II’ will be released on December 4th via City Slang. Pre-order & streaming links can be found here: https://sonlux.lnk.to/Tomorrows

8) Weight of Your Air