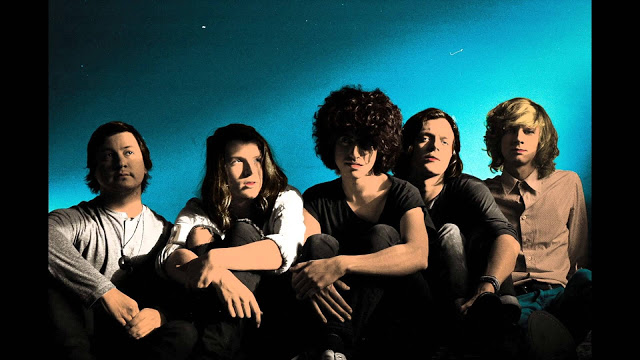 Antimatter People are a psych-rock quintet based in London, consisting of Yehan Jehan (lead vocals, guitar, keys), Elliott Arndt (flute, keys, percussion), Mikko Hivikallio (guitar, keys), Spencer Lezaja (bass) and Callum Brown (drums).  Since their formation in 2013, the band have received critical acclaim for their rich and diverse sound, which combines heavy grooves, synths and fine production. For a band so early on in their career, Antimatter People have an incredibly accomplished sound – it’s easy to see why they have been compared to the likes of Pink Floyd. Expect this band to be huge!

Hi there, how are you and what are you up to today?

Your music incorporates influences from many genres, ranging from classical to rock to hip hop, yet you manage to blend them all together so seamlessly. What are some of the albums and artists that have influenced you the most?

It’s important to have a broad understanding of music from all over the world as well as different genres. What we find interesting is analysing and appreciating a different culture’s approach to a common genre in that era. In the landscape of psychedelic and progressive rock music, one that’s very international and diverse in itself, artist from all over the planet have influenced us, ranging from Iran to Hungary, Nigeria to Thailand, and anything in between.

Some early influences that are at the core of the band’s sound lie with European artists, particularly film composers in Italy and France. That being said, arguably the most important aspect is the fusion of all these influences, sonic or visual, physical or spiritual. Open up to anything and it’ll affect you one way or another.

What other artists and bands do you really like at the moment?

You’re performing at the Hoxton Bar & Kitchen in London on February 26th. What can we expect from your live performance?

We’re only playing brand new songs, no one’s heard them before. We’re trying stuff out for our upcoming vinyl release show on March 3rd at The Waiting Room.

What’s the best gig you have ever done and why?

Probably our show at Shoreditch Church. We had a choir, the church organ, analog oil projections that lit up every surface inside the church, and we covered Gainsbourg’s Cargo Culte. This summer was also great fun at Lott Festival in Germany, everyone was super kind, we played at 1AM and hung out with a camel called Couscous.

What’s the worst gig you have ever done and why?

Yet to happen and it’ll be great!

You’ve played in some interesting venues, including an old church! What would be your ultimate dream venue to play?

There’s a few I guess. As far as London venues go, Roundhouse has always been a favourite. It’s always been a dream to play there. But obviously the real deal is always to play in places where music wasn’t necessarily designed to be played. We wanna play in hot air balloons, in the Taj Mahal, the Hagia Sofia and on the moon.

If you weren’t musicians, what would you be?

If you could collaborate with any artist, dead or alive, who would that be?

Finally, do you have anything coming up in the pipeline e.g. new releases, gigs or anything else you would like to tell us about?

We’re releasing a 7” vinyl of our latest single, “No Need To Be So Small”, and we’re playing at The Waiting Room to celebrate its release on the 3rd of March. Come one come all!

Thank you very much for taking the time to chat with us Antimatter People!

Check out the band’s video for their latest single, “No Need To Be So Small”.