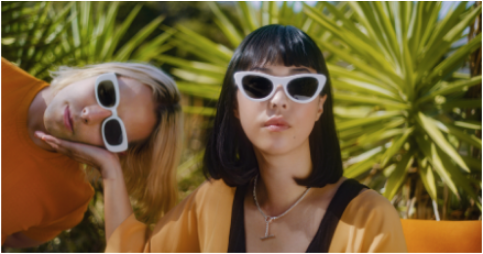 After weeks of hinting to fans of new music, indie-pop mainstays The Naked and Famous have released their new single ‘Sunseeker’, out now via Somewhat Damaged/AWAL. Now writing and recording as the duo of Alisa Xayalith and Thom Powers, the two embrace transformation whilst remaining authentically true to form on the new single.

Alisa Xayalith says “’Sunseeker’ was written in a time when I was covered in joy and positivity. My dog, Ginger inspired it. She came into my life unexpectedly, as did the boy who I fell in love with that found her. I didn’t grow up with a family pet, and now I can’t imagine life without her. She was present for all the TNAF sessions over the last year. I started calling her my ‘Sunseeker’—she’d disappear into the garden, and I’d find her in various places basking in patches of sunlight beaming through the trees. The song is about something, or someone, appearing in your life that you didn’t know you needed.”

The reinvigorated duo has been working on new music out of Xayalith’s Los Angeles home, joining forces with new collaborators including Luna Shadows (producer/multi-instrumentalist who previously played keys for The Naked and Famous), and Simon Oscroft (a childhood friend of Thom Powers, who production credits include The Aces, Morgxn, and more)

Originally from New Zealand, The Naked and Famous made their full-length debut with Passive Me, Aggressive You, which featured their breakthrough hits ‘Young Blood’ and ‘Punching In A Dream’. The album climbed the Billboard 200 chart and earned countless accolades and Platinum-certifications around the world. As a five-piece band, The Naked and Famous toured across the globe playing sold-out headline shows and the biggest festival stages. They finally landed in LA, living together in Laurel Canyon and releasing their sophomore album In Rolling Waves which was boosted by the hit single ‘Hearts Like Ours’. Their third LP, Simple Forms, released in 2016, is often recognized as their most complex and compelling work to date.

Following the release of Simple Forms, the two founding members of the band have gently let go of their expectations and writing as a five-piece. Says Powers, “We chose to focus solely on the songs as pieces of art. We centered on each song’s meaning, and how fresh they felt to us—how they made us feel.”

Now at work on more new music, The Naked and Famous are fully honoring the singular chemistry that endlessly fuels their creative partnership.